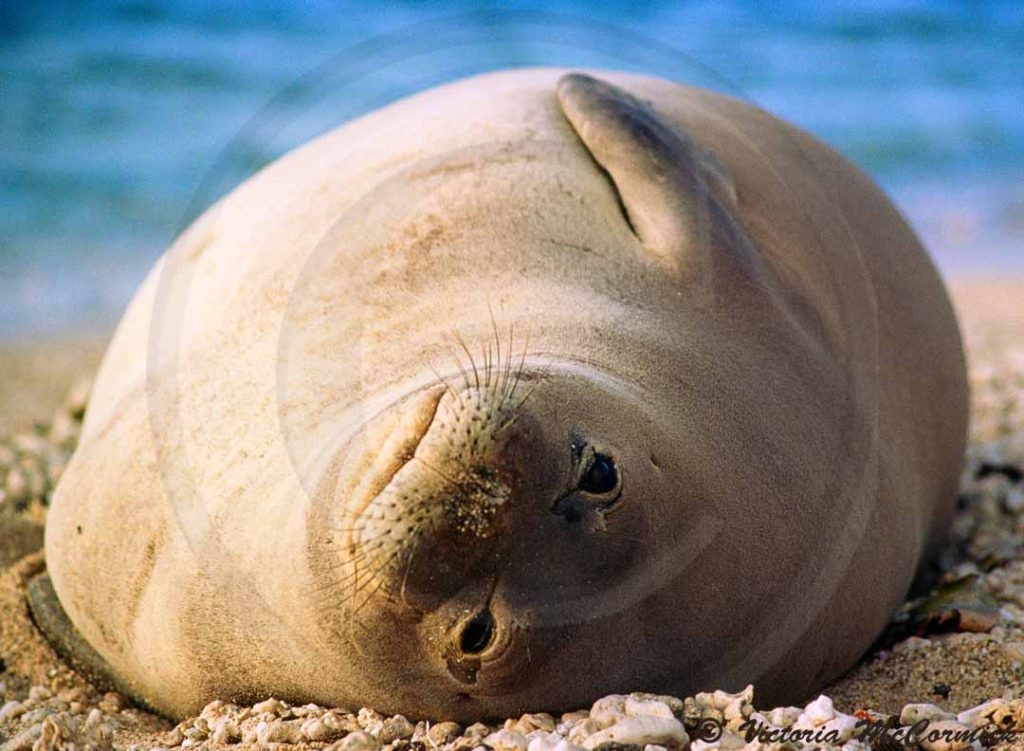 “Big Mama” by Victoria McCormick – This is the mother the day before she gave birth.

I photographed my first Monk Seal in 1991. On a morning walk with my daughter on a remote coastline on the North Shore, we came across this large seal resting on the beach. Another walker was concerned and wanted to push her back into the ocean. I pleaded with him to leave her alone which luckily he did as that would have violated State and Federal laws. I came back later in the day with my camera to film her. I was careful to stay far away and concealed to not disturb her.

She was close to 600 pounds and gave birth the next day. Her pup was the first recorded birth on Oahu.

Over the next six weeks I continued to observe this female raising her pup and captured these moments with a long lens. In the course of this time, the affection and devotion the mother paid to her pup was inspiring. The mother did not leave the pup’s side to feed during this time but transferred her weight to the pup (averaging 3-4 pounds per day) by her rich milk. I was told that to wean the pup, the mother would simply swim off into the ocean and abandon her pup forever. I simply couldn’t believe that with so much devotion showed by the mother that she could do that. But sure enough, one day she was gone!

After the pup was weaned, the National Marine Fisheries Service collected the pup and relocated her to the Hawaii’s Northwestern Islands. As of 2020, the pup is a healthy female adult now living and pupping in the Papahanaumokuakea National Marine Monument between Midway and Kure Atolls.

During this time at the pupping beach, I met top biologists devoted to Monk Seal recovery as they monitored the seals. These new friends where a large part of my being sent to the Hawaii’s Northwestern Islands to photograph the endangered Monk Seals.

Little did I know that day walking on the beach, that the chance encounter with a fat Monk Seal would lead me into such wonderful friendships. They changed my life and perspective. 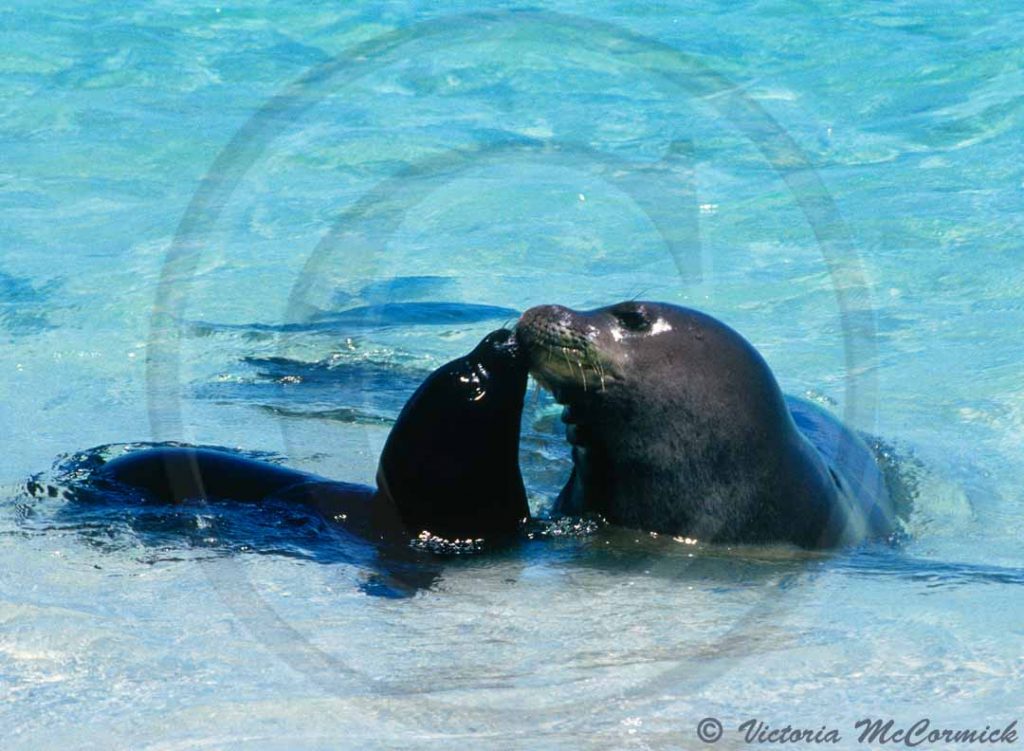 “Adoringly” by Victoria McCormick – The young pup and mother play in the shallows.

The Hawaiian Monk Seal is Hawaii’s living fossil who has not changed for 15 million years. They are endemic of Hawaii. Named possibly for their preference of solitude and loose skin around their neck resembling the hood on a monk’s robe. Looking into a monk seal’s eyes wins and delights numerous hearts along their path. Many a person has been captivated into helping save this endangered species.

Hawaiian Monk Seal breeding populations occur on remote islands and atolls (remains of ancient islands) that lay hundreds of miles northwest of the main Hawaiian Islands. A population estimated at thirteen hundred animals live within the Papahanaumokuakea Marine National Monument which is also the prime nesting location of the Green Sea Turtle and for millions of seabirds. Wildlife management provided by National Marine Fisheries Service, the U.S. Fish & Wildlife Service and Hawaii Department of Land and Natural Resources may be considered the key to survival of these species in Hawaii. 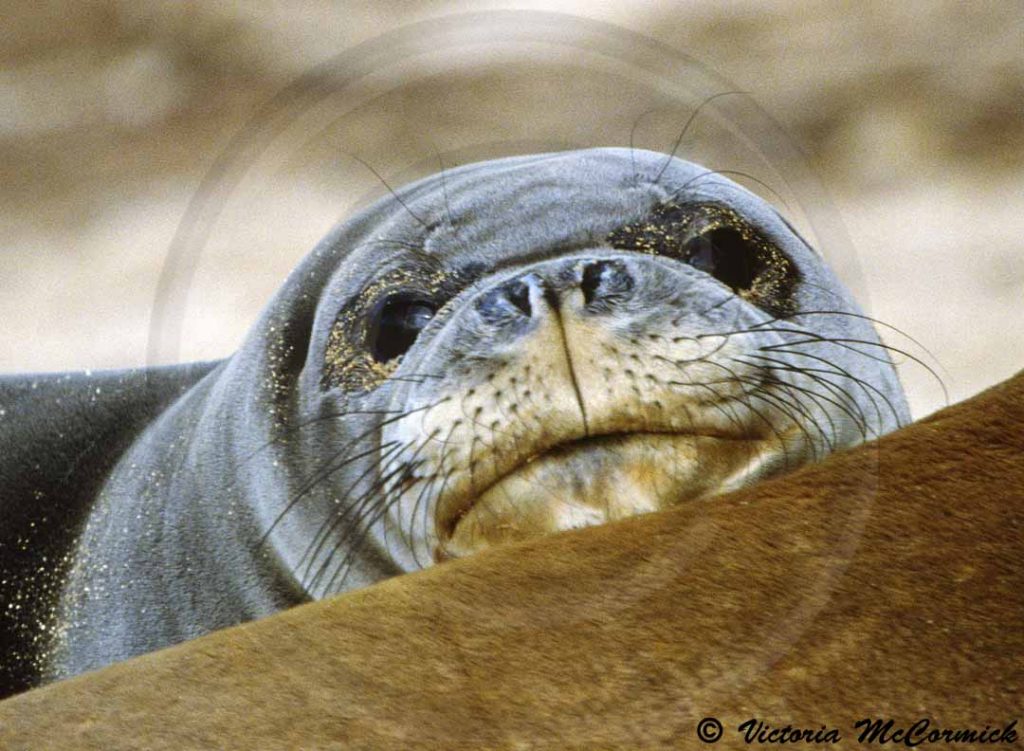 “Sila” by Victoria McCormick – As the pup gets older her fur became a silvery gray.

The pup at first is fine with its excess weight, spending many days playing with other weaned pups and sleeping a lot. When it realizes it needs food, a menu of sea cucumbers appears to fill these first days of hunting until the pup’s fishing skills improve.

Hopefully, this photograph and information have given you a glimpse into the unique life of the Monk Seal. Perhaps by a Monk Seal’s eyes you too shall be captivated with a new endearment in your heart. 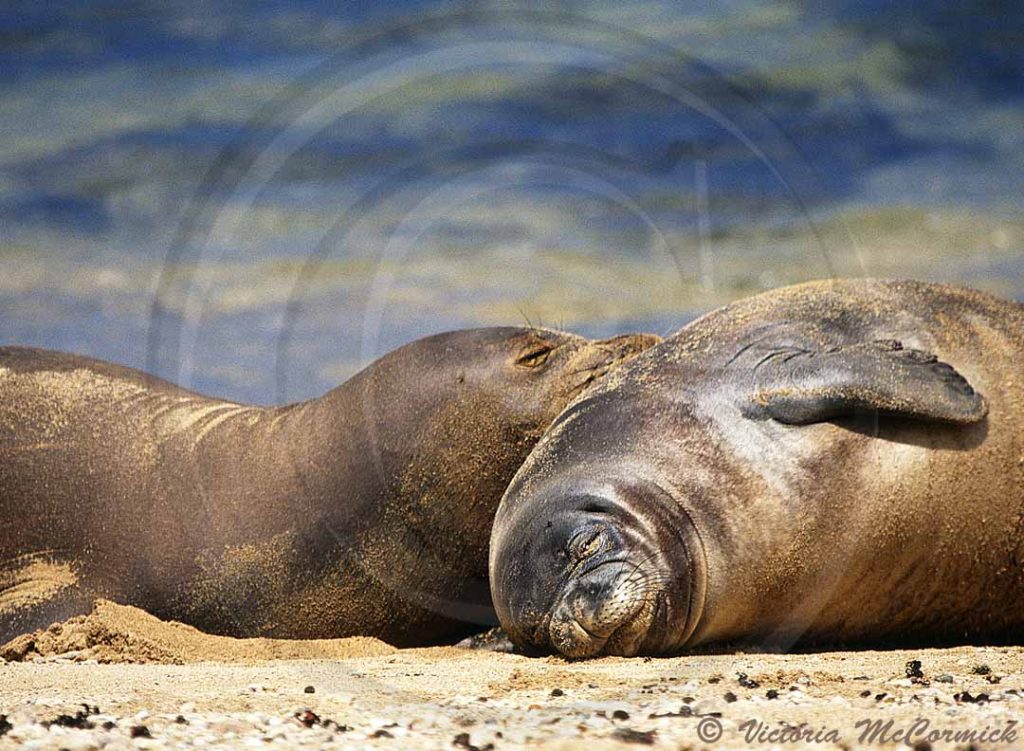 “Lazy Days” by Victoria McCormick – The pup (right) has gained so much weight from her mother’s milk in 6 weeks that she weighed in as one of the healthiest pups.

You can find out more about Hawaiian Monk Seals and those helping to protect them and their home in the Northwestern Hawaiian Islands at: