Sculptures of blue-azure are laced with sea spray in this display of Waimea Bay’s glorious inside break. This World famous bay on the North Shore of Oahu is one of Hawaii’s most visited and most versatile beaches. During the summer months, picturesque Waimea Bay draws residents and visitors alike to its inviting shores, to enjoy kayaking, standup paddling, snorkeling, shelling, building sandcastles and of course sunbathing. The striking contrast between the crystal clear aqua blue waters and the smooth, sparkling, white sandy beach provide beachgoers with the best a beach has to offer. During the winter months, Waimea Bay transforms itself into a powerful surfing Mecca with waves reaching 25 feet and more. Even seasoned surfers approach the ocean’s edge with caution.

Oahu has two extinct volcanoes. In the west, Wai`anae, locally called Mount Ka`ala, is 4,025 feet above the sea. In the east Ko`olau peaks at 3,150 feet and is 30 miles long. Ko`olau is locally known as the Ko`olau Mountains. Volcanoes can lay dormant for a million years before sputtering back awake near the shoreline. These eruptions are cone-shaped mountains of cemented ash called tuff. The sea water causes steam and pressure as it seeps into the underground magma eventually causing an explosion. This type of explosion is how Diamond Head, Koko Crater and Koko Head were formed. 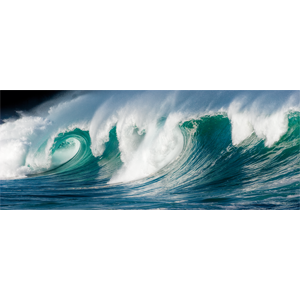